A-League fans may recall that name.

The former Fulham staff coach coached in the Hyundai A-League about ten years ago, with the New Zealand Knights in the 2006/07 Season.

Englishman Nevin told www.a-league.com.au that the Caltex Socceroos number one is quickly finding his feet after his off-season move from Valencia (following a loan spell back in the Belgian league).

“The keepers have specific training but they come and join the main group so I see and work with Mat every day,” Nevin said.

“Like all the players here, Mat's really worked hard in the last month or so.

“He's a fantastic fella with a great work ethic,” he added. 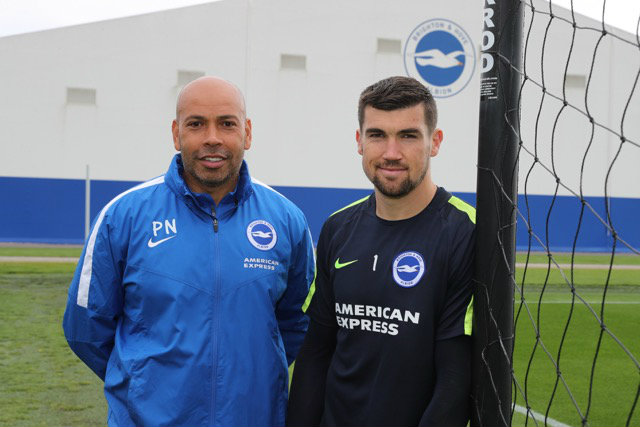 Ryan kept his second clean sheet of the season on Monday, helping the Seagulls to a crucial three points against Newcastle United, propelling them to 14th on the Premier League ladder.

“Every game that goes by, we're getting more familiar with each other and with the level and quality,” said Nevin.

“It just takes a bit of time to get used to the pace and the quality in the Premier League.

“We're all pretty confident – Mat included – that we'll end up doing well and being competitive within the league this season.”

All eyes will be on Ryan and his Seagulls teammates this Sunday as they face a tricky away tie at the Emirates against Arsene Wenger's Gunners.

Then Ryan will jump on a plan bound for Malaysia ahead of the Thursday October 5 clash with Syria in a make or break World Cup 2018 playoff first leg tie.

Ryan and the rest of the Caltex Socceroos will then be back home for the second leg tie to be played at ANZ Stadium on October 10.

Football Federation Australia (FFA) today announced that it had convened a National Bushfires Working Group to coordinate football's response to the emergency and raise funds for the long-term rebuilding of affected communities. The Working Group will bring together key footba

Talking Points: Have record-breaking Glory transformed into the dominant force that made them Premiers?

"I think we're actually dominating games mores than we did last year? but we're not seeing the rewards of that yet," Tony Popovic said after Perth Glory's Round 8 loss that saw the Premiers slump to bottom of the Hyundai A-League. "I firmly believe that will happen.

Markus Babbel has been dismissed as Western Sydney Wanderers head coach. The German was shown the exit door the morning after the 1-0 home defeat against Perth Glory after Western Sydney had collected only four points from their last 10 matches. Wanderers surged out to a su

Every E-League Signing for Season 3

The all-new E-League 2020 season is almost upon us and Hyundai A-League clubs are finalising the signings who will aim to lead their clubs to glory. As the announcements are made, you can find out which e-sports stars will be pulling on their team's colours as the E-League ret

Watch all the McDonald’s Mini Matches from Round 15

Need to catch up on any of the Hyundai A-League action from Round 15?

SAVE OF ROUND 15 | Nominees | Hyundai A-League

GOAL OF ROUND 15 | Nominees | Hyundai A-League